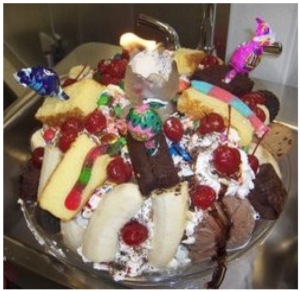 Although I come from a family of ten children, my clan is no different from many others; we just do everything on a larger scale. While some families gather around a 15 pound turkey at Thanksgiving, ours tips the scale closer to 40…and we usually don’t have leftovers! Ordering two large pizzas is never enough for us, we always order closer to eight or ten. Likewise, our dessert is no different.

While some households make due with a single scoop of ice cream, multiply that by 100 and you have something closer to our dessert: the Super Sundae! At first glance this delicious delight appears to be a bowl of melting peaks covered with a conglomeration of candy. Gummy Bears attempt to climb the slippery mountains as a crowd of M&M’s, Skittles, sprinkles, and Neccos cheer them on from the gooey valleys below. Whipped cream covers the pinnacles and you can actually see a low pressure weather front move in as these fluffy clouds move lower.

Our sundae may appear complicated and difficult to make, but creating this assault on the taste buds is actually quite easy. Take the largest bowl you have (as you can imagine, ours is bigger than most) and set it aside. Then hop in the car, with all your kids, and head to the grocery store. Because we have ten children in my family, we each get to pick a component of the sundae. There are three, half-gallon ice creams whose flavors need to be chosen, in addition to at least two toppings (my family prefers butterscotch and chocolate). After the framework for the sundae has been determined, let the remaining decision-makers go crazy in the candy aisle. I’ve eaten everything from black licorice (we only tried it once) to Skittles (they freeze in ice cream and can break a tooth) to peanut butter cups (a family favorite) to frozen strawberries (my mom’s attempt at “healthy”) in a Super Sundae.

You would think with all the competing sweet treats and textures our mishmash of a confection would be unappetizing, but you’d be incorrect. As flavors battle each other and burst in the mouth, it almost becomes a game to see if you can pick out the different tastes, all without losing a tooth.

This traditional dessert is comparable to my family. With so many dfferent personalities, ideas, temperaments, intellects, likes, and dislikes, you would imagine my family doesn’t go together, but again, you would be wrong. Sure there’s a 20 year difference between the oldest and youngest child, there are seven girls and three boys, and one child doesn’t even look like any of the rest of us because he’s adopted, but we’re one unit. Yes, at times, there are strains and disagreements between us, but if you hurt one, you hurt us all. That’s my random, crazy family, but they’re my favorite family and I wouldn’t ever trade them for a plain scoop of ice cream. Just like all the components of the Super Sundae, we may have dfferent exteriors, interiors, and any other kind of “-terior,” but when put together, we become something delicious, beautiful, and a delight to the taste buds.

Welcome to the Crazy Cady Sisters Website! We are four of the ten Cady children co-authoring a humorous non-fiction book about parenting, child-rearing, and growing up in a family with ten children.

Not sure if we're you're speed? Read our blogs. You'll understand exactly what kind of flavor (and personality) we have.

And, after you've fallen in love with us, please take a few minutes to sign up for our Newsletter. Inside you'll find the cream of the crop, and a tidbit or two of content you can find ONLY in our newsletter. C'mon. Be one of the chosen. Sign up. You know you wanna.